I am a political scientist, writer and commentator based in the UK and Australia. My research tackles thorny questions of statecraft, conscience and threat, and looks backwards into history for a better understanding of the way we live now and the choices we make. My areas of expertise include:

Terror in the Western Mind: Cultural Responses to 9/11

Twenty years after the terrorist attacks on the World Trade Center and Pentagon, we can now see that the War on Terror profoundly affected Western self-understanding and the secular liberal image it sought to project onto a global canvas at what was widely assumed to be the end of history. The dramatic change in awareness that 9/11 brought about was particularly vivid, this book maintains, in the media that sustained and displayed the West’s self-image. In particular, fiction, film, drama, the visual arts, and popular music have all struggled to come to grips with the phenomena of terror, asymmetrical warfare, home grown jihadist activism, and the moral and political dilemmas they evoke.

The book further argues that the evolving progressive response to 9/11 assumed an increasingly ideological character via the critical and normative international relations theories that came to dominate Western campuses after 2001. These perspectives gave substance to an increasingly critical depiction of the West’s War on Terror and its popular promotion through works of literature, film, music, and the visual arts. Promoted through these popular genres, it combined the ingredients that formed “woke” ideology in an accessible formula that subsequently dominated both the mainstream media, academia, and, in time, government agencies.

A provocative and disturbing account of how terrorism has shaped our cultural landscape over the past two decades exposing the West’s deeply unsettling moral crisis. A dazzling, intelligent, and thought-provoking read.

A provocative but vital and sharply observed study of how the artistic establishment has reacted to the past two decades of the War on Terror.

Not many scholars can write authoritatively and accessibly about Clint Eastwood, Grayson Perry, Foucault, Tony Blair, Zero Dark Thirty, and Islamism, let alone make sense of the links among them in this magisterial overview of the impact of 9/11. But Jones and Smith do – and they pull it off with style.

A highly provocative and engaging thesis about the ways popular culture responded to 9/11 from two authors always keen to challenge established orthodoxies.

A gripping, ruthless analysis of how terrorists, their apologists, and moral relativists – motivated by malignity, stupidity, or naivety – are full of passionate intensity in their struggle to destroy our magnificent civilisation.

ABOUT HOW TO ORDER 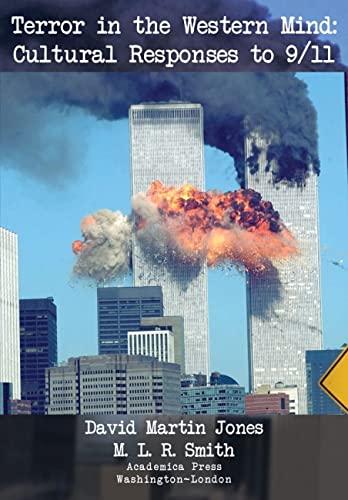